A Scottsdale Chiropractor who does more

Search through our services and resources

Welcome to the office of Dr. Jeffrey Robinson a North Scottsdale chiropractor dedicated to not only spinal health but overall wellness and vitality. He is highly experienced having treated patients for over 20 years, helping everyone from infants up to 95 year old patients! Dr. Robinson’s approach to treating Sport injuries, Auto accidents, Work injuries, Neck pain, and low back pain emphasizes overall health and wellness. We accept almost all PPO insurance companies, Medicare and Auto-accident liens. For patients with high-deductibles and no insurance; we have cash rates/family plans. We can provide same day x-ray/MRI/lab-work prescriptions and have numerous orthopedic/neuroglial specialists who we refer to should patients require.

At AZMulticare we pride ourselves in being more than just a Scottsdale chiropractor by incorporating innovative diagnostic techniques like Applied Kinesiology. This testing along with routine blood work allows us to individualize each patient’s treatment plan and to optimize treatment outcomes. Helping guide our patients in their quest relieve their pain is our goal. But improving the quality of their life is our priority. We want our patients to live a full active pain free life and our services are just a part of that.

How can we help?

Maybe you have seen a chiropractor in the past or are seeking a local Scottsdale chiropractor as a first time patient.  Expect your experience at AZMulticare to be different from any healthcare experience you’ve had in the past.  Maybe even something that changes your life forever.   Chiropractic care relieves subluxations (misalignments) from the spine, stiffness is reduced and improvement and motion is restored.  The Following conditions can all improve with manipulation that is needed;

Just to name a few.

We also then incorporate our other therapies to complement the chiropractic treatment to deliver the fastest results possible.

We do our very best to get emergency cases in the same day and have same day appointments available most days.  Call today to see how we can help you with your condition.

How we can help you?

Dr. Robinson has worked on athletes in the NBA, NFL, NHL, MLB, PGA Tour, and LPGA Tour. But have also been privileged to help patients in the recovery from some of the most challenging health disorders such as MS, Cancer, Lyme Disease, Mold toxin Illness, Hashimoto’s, Rheumatoid Arthritis, Colitis, and Fibromyalgia to name a few. 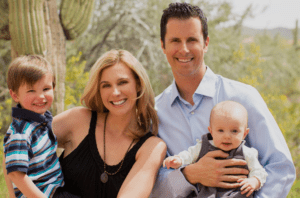 He did his undergraduate work at the University of Windsor. There he was introduced to Human Kinetics, Biomechanics, Exercise Physiology, and Human Anatomy. With a passion for healing, he decided to pursue Chiropractic at Southern California University of Health Sciences in Whittier, CA. While there he was exposed to Nutritional and Eastern philosophies of healing and pursued learning in those fields upon graduation.

After graduating he chose to study Chinese medicine and became licensed in acupuncture in 2006 and complimented his study of acupuncture and chiropractic with a thorough education in functional medicine.

In 2010 he began implementing Applied Kinesiology into his practice and watched some of the most astonishing patient transformations of his career. Applied Kinesiology not only provided one of the most valuable diagnostic methods for problems in the structural system of the body but also showed the impact of Food Toxins/Sensitivities, Heavy Metals, Parasites/Fungus/Virus/Lyme/Candida/Bacteria, Chemicals, Mold toxins (Mycotoxins) and their effects on human function.

Dr. Robinson has published two papers on the topics of Mycotoxins and Biofilms, both of which he has had personal experience with and are contributors to many complex health disorders.

In his spare time he enjoys playing golf, hockey, skiing, biking, hiking, working out and spending time with his wife and kids. He also enjoy the outdoors and loves fishing especially when he goes home to Bracebridge, Ontario, Canada.

How is Dr. Robinson a “different” Chiropractor?

Most patients don’t realize how much education a Scottsdale chiropractor has. Chiropractors have education standards that are very comparable to that of a medical doctor. After completing a strong emphasis of basic sciences in college, chiropractors attend a four year chiropractic college.

This means that Scottsdale chiropractors are primary care physicians. Dr. Robinson furthered his education by doing further coursework with the International Academy of Medical Acupuncture to then become board certified in Acupuncture along with Physiotherapy. Dr. Robinson also completed course with the National Strength and Conditioning Association.

His approach is to utilize numerous forms of Holistic treatments to treat each patient individually. X-rays or advanced imaging are not required in most cases but can be helpful. Dr. Robinson utilizes good orthopedic testing, a good history and safe treatments to help best diagnose his patients.

Applied Kinesiology is his main diagnostic method to uncover each patient’s individual structural misalignment but can also be used to find the “root cause” of inflammation, toxicity or immune stress.   Many patients find our practice when they have tried numerous other treatments and providers.  Dr. Robinson always attempts to look “out of the box” especially with patients that are not seeing results with other treatments.

Our Articles and Posts.

Monday-Friday: 8am to 5pmSaturday & Sunday: Closed

We provide Chiropractic, Acupuncture, and Spinal Decompression. We Utilize Applied Kinesiology to optimize our Holistic Treatments.

AZMulticare Chiropractic Acupuncture Clinic
5.0
Based on 23 reviews
See all reviewsWrite a review
👍👍
2 + months into Dr Robinsons care - I have loss approx 10 lbs, just shy of eliminating my prescriptions for Asthma, Dry Eye and Skin irritations.
Thank you for your guidance, supplements and dietary directions
I feel great !!!

Lee Elingburg
17:24 29 Mar 20
I recommend Dr Jeff Robinson to get at the TRue cause of the symptoms..and prescribe the best from Supreme Nutrition..IT WORKS>>

Sam Priorello
16:19 28 Mar 16
Dr. Jeff knows his stuff. He does not just do things to you he makes it so you can thrive. It is not just about Chiro it is about giving your body what it needs to thrive too! This marathoner and triathlete appreciates his wisdom.

Paul Mershon
23:46 11 Apr 15
Dr. Jeff has been a legitimate life saver to me and everyone I have referred to him have been blown away!

Jesse L Zambrano
14:23 22 May 14
The care I have received from Dr. Jeff has helped me so much in getting me back to feeling like my normal self & living a fulfilling life. I am positive after many visits to Doctors with no explanation on what was the root cause it took Dr. Jeff's unique skill to find & resolve the root cause.

Paul Djurisic
16:59 16 Jul 13
Dr. Jeff Robinston is talented and works with patients to deliver successful results. I particularly like that he uses Applied Kinesiology as a tool to expedite healing. We are so lucky to have found him as part of our healthcare team. Thank you Dr. Jeff Robinson!

Call Us
Email Us

Back to top
Page load link