Gua Sha is a healing technique of traditional East Asian also called “coining, spooning or scraping”. It dates back 700 years and involves scraping the skin with a smooth instrument to create a temporary, therapeutic rash called “sha”.  The creation “sha” is the body’s toxic debris or “congestion” of blood, that has become stagnant. 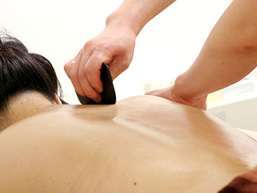 Gua Sha treats acute and chronic pain which is caused by sluggishness of a patient’s blood and Qi. Scraping to raise a rash treats pain and illnesses by compelling stagnant blood to move. Movement of blood and fluids is moves metabolic waste and increase micro-circulation in a treated area. Gua sha produces an anti-inflammatory and immune protective effect

The rash of Gua Sha, also called “petechiae” or “ecchymoses” in Western medicine is a visible sign that static blood has regained a healthy flow. The rash will clear within two to four days.

To begin treatment we press the patient’s skin to search for tender points/knots in the underlying musculature. We look for areas that display blanching or delayed capillary refill. We then lubricates with oil and scrapes the areas in broad strokes until the characteristic rash appears.

The color and duration of the rash helps diagnose and tailor a treatment plan to suit the patient. Light-colored Sha can indicate a “deficiency of blood,” whereas dark-colored Sha suggest the blood has been stagnant for a long time.

Reflexing therapies such as Gua Sha, cupping and acupuncture help to reduce symptoms of pain by affecting the function of “nociceptors”, or pain-sensing neurons. Moreover, these social, comforting therapies may benefit patients experiencing pain by promoting relaxation

Treatment is contraindicated in patients taking blood thinners or who have bleeding disorders. The treatment should also be avoided with bruising, or superficial skin lesions such as burns and open sores.